Published November 12, 2009 | By Korey
Pets: Bach’s Story by Darla Phelps
Alright, so I’m one of those people that honestly get turned on by age-play, but I don’t LIKE the fact that I do. All spanking literature used to be something I read under the covers—I didn’t want anyone to know what I was reading! Spanking, I knew, was SO taboo they wouldn’t even get it. They would think I was odd.

But what do you do when you WORK in the spanking biz? You become a little desensitized, I’ve gotta tell you. All day it’s spanking, spanking, spanking… Nothing’s ever new! Nothing seems to give me that old nervous tingle at the pit of my stomach. Except this one.

This story, even though I’ve read it a few time, still gives me that old mischievous “I shouldn’t be reading this” sort of feel, when it’s NOT EVEN AGEPLAY. So, in short—it’s for the people that want to read age play but don’t want to support age play.

How, you ask? Let me explain.

Bach is an alien—who looks human, if humans had 4 fingers and were eight feet tall. (Here’s what to keep in mind when I say “Eight feet” is tall. You know how “Predator” dwarfsArnold Swartzenegger when they’re fighting? The Predator was only 7’4”. Thus, 8 feet is HUGE.) 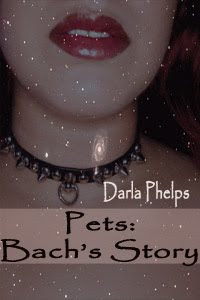 Pani is a human—taken right off the earth’s surface and put into a cage to be sold at a pet-store. And she’s exotic looking—she’s a redhead, she’s small, she’s cute. Bach buys her.
Bach isn’t an experienced pet owner, so he does everything anyone tells him to do, or what everyone else does—he dresses her up in his daughters (his daughters and wife are dead) old clothing, does up her hair, and then tries to “train” her with spankings… And enemas, and stretchings, forced sex, and time-outs, and everything else.
But then he finds out that humans are more intelligent than he’s told—definitely not as smart as his species, but definitely an intelligent race with intelligence that far exceeds a pet. You watch as he ends up falling in actual love with Pani, and not in the human-pet relationship sort of way.
So—it’s sort of age-play, sort of sci-fi, sort of bdsm.
At the end of the day, it’s fascinating. The story is told though Bach’s POV (supposedly there will eventually be a sequel where you see the same event from Pani’s POV), and you get to see his struggle with falling in love with his pet and letting her fill the void that was developed when his family died in a car accident. He has to learn pet-training the hard way, and you get to see his thought process through the whole thing. You become very sympathetic towards him until the weirdness is completely gone—your mind will allow Pani to become a pet and you will be brought along the journey with him. Because of the way Phelps rights it, you become entranced into this world. Just be careful—as soon as you start actually talking about what you’re reading, it sounds pretty weird and pretty fast. But that doesn’t take away from the excitement and hotness of this story.
It’s definitely not like a lot of the stories Blushing Publications’ is known for, where they’re just romance stories with a spanking thrown in instead of sex. This one is not something you want your mother to find you reading. But still, it is a great little story and I recommend it to anyone willing to expand their minds.
Available as an eBook at www.romanticspankings.com/index.php. Adults only.
Posted in BDSM Book Reviews | Leave a comment

Originally posted by Korey on Bethany’s Woodshed Story Forum
“A GREAT HIGH FANTASY…”
At first, I wasn’t going to read this story. I normally don’t read stories about dragons, you see–I look over at the fantasy section when I’m at Borders, and decide quite openly that I won’t step near it. Fantasy has the potential to get really strange, really dramatic, and really complicated, really fast.

And I’m not too far off-base–Nattie Jones’ story here does the same thing–it starts of strange, gets really dramatic very quickly–but I guess it works, because this story was pretty damn good.

I digress–I was sceptical at first of the whole layout of Khys–I didn’t know if I liked the wise-woman set up and the choosing block at all. Definitely, Khys is a strange-ass place–here, women have no privacy, can be used, and are thought mainly of as property. Someone growing up in such an environment, I wouldn’t think could be at all interesting.

But I was obviously wrong. Sierra’s a pretty neat chick–oh yeah, she’s subservient. How can you not be when you grow up at Khys? When you grow up in North Khys, by 20, you’ve probably had over 4,000 spankings. That’s a lot. I, personally, would have given up the fight. But not Sierra–this character has nothing to lose, and better yet, she knows it. And when you have nothing to lose, and you get spanked about once a day, anyway, why not throw hot coffee on the master? Why not savour every bit of kindness you get, and resent everything else? Why not fall in love with the dragon master? As a woman, you’re going to serve someone while you’re at Khys–why not someone you like? At least it will then be service with a smile.

Truthfully, I nearly cringed when I saw that she was falling in love with him. The dragon master was a little unreadable for me, making the story pretty unpredictable. Up until the last chapter, I wasn’t sure how it was going to end–I got into thinking a servant could never be a Dragon Master’s wife–yes, yes, I too got caught up in the main character’s thought-process until I could no longer predict the people around her any more than she could–and I was actually surprised to see an ending I was happy with. The story should have been predictable, only it really wasn’t. Nattie’s world created a wonderful dynamic (where you can oust your wife, for starters) where you, as the reader, had to just let go and let the world reveal itself to you.

To sum up here, I just want to say that although I avoid fantasy like the plague, I really enjoyed myself by this magical story. So, if you didn’t read this story because the title and subject matter scared you off; grow a pair, read the story, and thank me later. Good job, Nattie Jones.

I don’t see why not! It’s a little off the beaten path, perhaps. Most women cling to the cliché where a man tames them by shocking them with a spanking. This has taming without the shock factor, but it works anyway.

Will people that are into Spanking Special Little Faucets (CDD, Ageplay, etc) like it?

An ageplayer will only enjoy this story if they still like reading about stuff that in no way concerns ageplay. This doesn’t have it. It’s not quite CDD either because of the fantasy theme—it’s very other-world based. But, it works. There’s a good vs. Evil theme to it. I don’t even know if someone would like it if they aren’t a spanko—but if you ARE a spanko… You’ll like it. I’m sure of it.

Available as an eBook at RomanticSpankings.com and as a physical book on SpankBooks.com