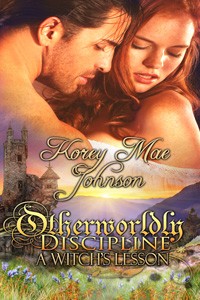 When Charlotte felt she could sidestep centuries of study under Ashcroft, she gladly took it… And immediately regretted it. Because even though she didn’t understand it, there was something she loved about the extremely serious wizard with a very hard hand that he seemed to consistently use on her modernly-minded bottom.

And when Moriarty, Ashcroft’s rakish servant, discovers true love in a mysterious half-nymph girl and brings her back to the Wizard’s tower, Charlotte’s world unexpectedly uncoils… And before she knows it, her debt to her new enemy is running due.

Can Ashcroft get to the “bottom” of Charlotte’s secrets and discover the mysteries that have come to surround her before it’s too late? And then will her friends fight for her, or will they lose her forever?

4 Responses to Otherworldly Discipline, Book One: A Witch’s Lesson by Korey Mae Johnson