What To Do About The Penis

Like dolphins, in college we lived in “Pods”–groups of twenty-two women sharing 11 bedrooms, 1 bathroom, on one floor. It was a good time–I had an AWESOME roommate, who must have been very patient (for not smothering me to death in the middle of the night. I still had night-terrors at that point, so sometimes I would wake up screaming, and she was STILL cool), we had a good view of the smokers’ hut from there (where all the drama was going down in the whole 5,000-student college), we were very unfortunately close to the 24-hour cafeteria so I gained the entire “freshman fifteen” that year, and in the winter we all went two weeks without hot water.

But what hangs in my mind the MOST was the penises.

Big ones, small ones, veiny ones, hairy ones, mostly all of them were completely deformed, and they all came in different colors. These penises were scrawled about the U-Shaped hallway in a mural form similar to the cavemen dwellings–if the cavemen were obsessed with pubic hair. 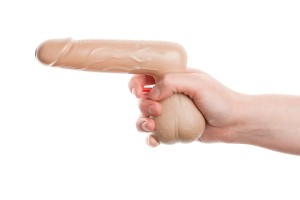 Maybe that’s why I’m scared to death of them. It was enough to give a girl a complex, after all.

It’s not that I don’t like James’ penis, I do. But I still get a little squeamish when he’s walking around naked–which he almost never does; he doesn’t even walk around in his chonies. Why? The penis. It’s intimidating.

Here’s why–I almost envision the penis a complete detachment of a man’s body. Like a wrist-watch. A forbidden wrist-watch. Or a pet. a FORBIDDEN pet. Because not in any picture or sculpture of the many penis depictions I had scene had there ever been a man attached to it. Men themselves treat it like something that thinks and acts on its own accord, very unlike my vagina. So when a penis gets involved in a sexual situation, it makes me go, “Well, and hello to you, too.”

Because of this, I find it impossible to write about them. I have literally found myself stealing discriptions. “Oh,” I think while reading. “Mushroom head… mushroom head. Yes. Pulsing member? ALRIGHTY.” Then I read diatribes like this:

“…Last night they’d been in the shower together, his manhood had been splendid. Erect, it was mouthwatering. She knew from last night that he’d grow so slick along that wide head…” -Kresley Cole, Dark Deeds at Night’s Edge

Kresley Cole’s always doing that. Making the penis not sound scary, unlike me. Normally when I write about a penis I slap down the ‘vague’ card while still treating it like it’s a sort of evil villain, and the heroine has no idea what’s coming to her:

She moaned, and as she did, he felt himself ache with lust. He nearly began to wonder if he was going to be spent before he got started. He kissed down to her belly button and then met her lips again and reached his hand down to finish undoing his pants. He quickly succeeded in freeing himself and placed his member on top of her mound.

She nibbled on his lip and he massaged her untouched folds with his member, hoping to lubricate himself before he entered her. It was easy enough—she was young, innocent, and probably had no idea that he was stroking her with this part of his anatomy, BUT she was also very ripe for the picking.

He put himself at her entrance and looked into her eyes before he shoved himself inside of her with a slight grunt. Although he had barely entered her—she was so breathtakingly tight—her eyes widened with a look of betrayal and her mouth took on the shape of a perfect “O” even before she made any sounds of protest. Her look only made him more eager to place himself deeper inside of her.  He held onto her waist as she quickly tried to squirm herself away from him, firmly keeping her groin pressed to his own even though she gave a sharp scream and kept wiggling desperately.

“Ek! Admiral! Stop! Stop! It hurts!” she cried as she struggled to squirm away from him, but he responded only by thrusting into her until he was all the way inside of her. She pinched her eyes together and gave a sharp moan. “It hurts, it hurts!” she continued to cry.

Ironically enough, in the same moment, Logan had never felt better in his life and as she whined, he groaned happily before he withdrew himself so that he could thrust deep inside of her again, extracting another cry from her lips. He reached down with one hand and stroked within her folds, above her entrance as he continued slamming his length into her again and again.

She wrapped her arms and legs around his body to hold herself closer to him, which did not make pleasuring her easy for Logan, but she seemed to hope that if she was close enough to him, he couldn’t thrust into her as deeply.

She held onto his neck with both arms, feeling completely overwhelmed with Logan’s purposeful looks and groans, the pain in her loins, and the slight tingling in her nipples. It was in her most overwhelmed moment that she felt her own loins seem to clench hungrily onto Logan’s flesh, and with a loud moan her hips betrayed her and let her fall back onto the bed while she bucked wildly against him, causing his member to go in and out of her violently.

With her tightness now clenching onto him like a vise, he felt he couldn’t hold onto himself any longer, and pressed his cheek onto Renny’s as she moaned, feeling his member contract and pulse wildly inside of her. Feeling as if he was too large for her as it was, his rapid engorgement made her groan and lock her jaw in response to the sharp pain. He breathily groaned as he released himself into her, spilling his seed deep inside her young, virgin body.  Finally, she no longer felt like he was ripping her apart.

They held onto each other afterwards, panting tiredly. “You said…” she finally whined with a dry, hurt voice. “That you wouldn’t hurt me.”

“I said no such thing,” Logan replied simply. “I said, ‘Does this hurt?’ You probably should have regarded it, in fact, as a complete change in topic.” He kissed her neck and began to murmur explanations for his treachery. “I couldn’t tell you it would hurt, my honey, because you wouldn’t relax, and it was hard enough entering you without your muscles clenching with fear and apprehension.” He nibbled on her neck slightly, then looked down and with a groan, pulled out of her. She responded by breathing a sigh of relief and comfort. ” –Korey Mae Johnson, Pursuit of Glory

and so I went to research the best ways to make it sound in my writing like it could LOOK good as much as it could FEEL good. It’s hard to write, and so I felt I needed a field-guide to help me figure out the right wording while I worked on my own cock-worship, trying to get the organ to not seem so damn intimidating.

I found this. It’s sort of like a training-wheels guide to writing the penis, something to build off of.

Excerpted from “Sex in the Romance: A Review of Romantic Encounters of the Close Kind”. (copyright John L. Ferri 1994, jlferri@epix.net)

I hope that helps any one who has penis-discombobulation like I do, but please let me know if you have any favorite examples from books you’ve read in the comments with awesome penis-descriptions!