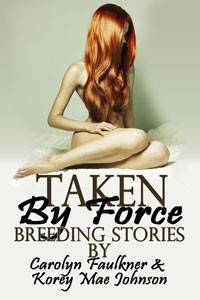 Taken By Force contains two extremely hot stories of young women bred against their will.

Born to be Bred, by Carolyn Faulkner:

Dr. Rance McCallister had a good thing going, especially for a man of his particular tastes.  His Facility processed anonymous, long forgotten girls by the dozens, all of whom were run through multiple kinds and styles of tests before they even entered, unwillingly of course.  Each girl was there for a simple reason—to be bred or sold off to the highest bidder.

Stephanie Barnett had caught his eye in more than one way. She was a redhead, which he had a penchant for, and she was a bit older and smarter than the others, who had all been too beaten down by life to try very hard to find a way out of captivity.

Not so with Stephanie, who still had plenty of fight left in her. She posed a bit of a problem for him, since she was a reporter, but he had the kind of connections that could erase any trace of her existence. He wanted her all for himself, wanted her to keep fighting him every time he took her, to struggle against every stroke of the lash, and to birth his babies, all entirely against her will.

The barbarian horde lead by the fierce kings Brock and Gareth has finally conquered the entire realm. As they march into the heart of the capital city, there is only one enemy still in their path: The Living Goddess of Banatal.  Kill her, and the realm will be theirs.

Except that they didn’t expect her to be quite so beautiful, so young, or so… innocent! Their plans quickly change, and they, like the King-Brothers before them, both choose the same bride—her—and she quickly finds out that she has no say in the matter.

Knowing that their future child will be worshiped as a God-King and will command the full loyalty of their subjects, they set out to breed their new virgin queen as soon as possible.

But the Goddess doesn’t want to be bred. She doesn’t want to be married, or feel the pain of a man between her thighs, let alone TWO men one after another, again and again, day after day! Men who want nothing more, it seems, than to dominate and humiliate her while filling her with their seed. Is there any hope of happiness for her?

Warning: These stories contain non-consensual sex (for the purpose of breeding), kidnapping, degradation, humiliation, and non-consensual discipline and punishment. If such elements might disturb or make you uncomfortable, please do not purchase this story.