I’m here to say it: just because I HAVE an English Degree doesn’t mean I deserved one. I mean, when I sit down and think about it, I know the rules of the road–I know where to put commas, etc. But that doesn’t mean I don’t sometimes write complete and utter nonsense.

Strange enough: When I’m enjoying the scene I’m writing I write FAR worse than when I’m gritting my teeth and bearing it, or flat-out writing a scene that my husband told me to add in there. Strange enough, when my husband commissions me to write something, I don’t  even need an editor. It’s not like I’m lost in the scene. Occasionally I’m writing from a bullet list.

Back to the matter at hand–I enjoyed writing “Otherworldly Discipline: A Witch’s Lesson”. I better have–I wrote the first 50 pages about 12 times, each with different plots. I was really in a fantasy mood. I wanted witches, I wanted wizards, and strange enough I had watched way too many Colin Firth movies at the time and so I wanted someone who was very proper, very smart, with Darcy-esque unlikability. Hence popped out Ashcroft Medwin. I was also surprised when he liked to dirty talk to Charlotte, once he actually started to have sex with her–but I realized that I like a really trashy bedroom scene. 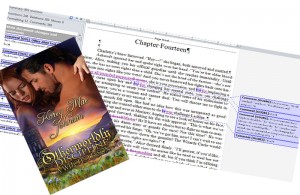 I liked Moriarty, mostly because writing about fashionable metrosexual men is a real hoot, especially when they’re prissy gits who REALLY want to be taken seriously, but their manicured fingernails don’t allow it.

Back to where it all went wrong–because I enjoyed the characters and was trying to make the dialogue “witty”, I made a real mess of the actual book. Luckily I was able to call in a favor with Mrs. Stone… Who probably spent HOURS reading that story. Final count of changes? 345 comments were made regarding “change this…” edits. This story is only 90,000 words long, people. And there’s only… drumroll… THREE places where I disagreed with her. Three. Out of Three HUNDRED and forty five.

Ever feel like you totally took advantage of someone? That’s sort of how I felt about poor Chula… I spent an hour–maybe two–making a cover for her almost a year ago. And to “pay me back”, she spent obviously 10+ hours editing this puppy. And she couldn’t have been nicer about uncrapifying my book. She did a bang-up job!

So gracias, Chula Stone. Gracias. Go visit her Amazon page and get your Stone on, folks! 🙂
Chula Stone at Amazon.

Also, I don’t want to not mention Jan, who read the first 13 chapters of Otherwordly Discipline and fixed a lot of problems that Chula didn’t have to later choke down. Not to mention I got a good lecture about not to use italics. Supposedly I have an obsession. 🙂 Thanks to you, too, Jan! 🙂 You’re awesome!