Another Night, Another Spanking

Curses!
I’ve told ya’ll before—If I don’t get a spanking for awhile, that doesn’t mean that when I DO get spanked, I won’t go through a time where I get spanked CONSTANTLY. I don’t quite understand this anomaly; all I can do is verify its existence.

The funny thing is when I find myself in the corner with my pants down and an incredibly sore bottom, I’m always surprised that I’m there. Not because I think I don’t deserve it… I just thought that since it had been 24 hours before doing something wrong, I was simply in the clear. Sort of like the thought that, “If a police car doesn’t chase you after a minute, he won’t chase you.” Fallacy.

I guess the reason why he didn’t do it before is that we both weren’t feeling well on movie night. But, the next day we, unfortunately were just fine.

So, for all you detail hounds, it wasn’t as bad as the one earlier this week. It was just over the knee, with his hand. In fact, a lot of it was over my panties. I think that was a reward for not arguing much. When I was doing what I was doing to get a spanking, I knew I had done something wrong, and I regretted it. I was thinking the spanking would, in fact, relieve me of some the guilt—and it did.

Alright. My interested is peaked. What did you do this time, Korey?

I gave James crap in front of our friends to shame him when they were over for “movie night” about his progress of working on our condo. We know the issue—we talked about it together until we were blue in the face. I just said something to shame him into working on it even more. At a time where he couldn’t argue or respond.

The REASON James won’t argue with me in front of his friends is because it’s sort of an old thing we despise seeing in our friends. We want to see our friends happy—we hate how our friends fight with their wives so openly; how they disrespect and belittle each other. It seems like they’re not “one”, they’re not a “team”; they’re bitter rivals that are forced to live with each other.

So, to lead by example, James didn’t respond to my put down. He just saved it for the next evening, after church, to deal with me about it. 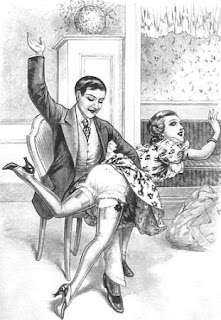 “Unfortunately, you KNOW I can’t discipline you in front of my friends. This isn’t the 1950s and I can’t be open enough about our relationship to punish you or give you blatant warnings or threats in front of them,” James told me.
Which raises a good point: What would it be like in the 1950s? From what we’ve seen in movies from that time period, it seems like it was pretty common to spank your wives. We don’t really know how accurate this is—we’re too pussy to ask our grandparents about the accuracy of spanking’s representation in the media.
“In the ’50s,” he speculated later when we were talking about it. “I wouldn’t imagine it being odd if I sent you to our bedroom right away, came into spank you, and then you came out. I still probably wouldn’t do it right there, of course—but they would definitely know you got one.

“Now,” he went on. “When you say things like that, in front of them, and I don’t respond, it looks like you won—that you succeeded in emasculating me. They don’t know that I took you in hand for trying to emasculate me in front of them. Which isn’t fair to me, and it’s not fair to you. Which is why,” he pointed a finger at me, “If it happens again, the spanking is going to be MUCH worse. You can NOT do that in front of them, because—I can’t just take you in hand. There’s nothing good I can do about it, and it’s not fair. Yes—I COULD respond with insults or harsh sarcasm like they do, but that doesn’t show that I’m a good husband. Not that we’re not humourless. We’re very open and we joke a lot, but when it’s obvious that it’s not joking—it’s jabbing, that’s when I need to do that.”

And he’s right—he should. It’s not fair to jab at him when he doesn’t jab at me.

Though, such things being said, it makes me wish it *was* the fifties. Not because I want my friends to know I earned myself a spanking with my horrible behavior, but because I’d like the other wives to get what’s coming to them, too. It seems like I’m the only wife who doesn’t have the leeway to be horrible.

At least James could offer spanking as a solution to his friends’ troubles back then without their jaws dropping. We might have gotten somewhere.