Since Korey has upped the ante by creating a repeating series, and since I’ve promised her I’d post much more often, I’ve decided to do the same. The general purpose of the series is to discuss and respond to complaints that women have about men (especially potential HOH’s) that I consider unreasonable or silly.

Upon hearing the subject of my series, Korey initially suggested (somewhat jokingly) that I title it “Quit your bitching woman!”, and in a sense this title is more accurate than “A Man’s Response”. However, I decided to be less combative, because the “woman” I’m referring to is certainly not Korey, but rather a generic “modern woman”. Furthermore, these are not meant to be responses specifically to Korey’s posts, although they may seem to immediately follow them suspiciously often. For the most part I usually agree with what she has to say. They may address side issues indirectly raised by Korey’s posts, or be about completely different issues. I’m going to try to keep them to a reasonable length.

Now, a confession… I play video games, for a couple of hours a week on average. I am not at all ashamed of this, I only call it a confession because I suspect a reasonable fraction of DD-minded women just decided that I am not worthy to be HOH. Even outside the DD community, I have found that a decent fraction of women have decided that if a man plays and enjoys video games, he must be immature and childish. I could give a detailed justification for why I find video games to be a perfectly acceptable pastime, how in many ways they are much more intellectually stimulating than TV, and how they can actually be a very family friendly activity, but I’m not going to do that. Instead, I’m simply going to make a blunt statement. First, however, I need to define two terms. I will make no effort to actually look these up in a dictionary, I will instead simply give what I use them to mean. (Why am I being so pedantic? Because as Korey pointed out, I’m an aerospace engineer who is still in grad school, and I am used to having approximately ten people edit, re-edit, and in general bitch and moan about everything I write. I humbly apologize for taking this out on you.) Now, the definitions:

Spare Time:
Time that is available for doing things that amuse you, for no other reason than that they amuse you.

Spare Money:
Money that is available to spend on things that amuse you, for no other reason than that they amuse you.

Note that I make no comment about how much spare time or spare money a person should have. This is dictated by circumstances. How much do you earn? Is the house paid off? Do you have kids or not? Is it a really busy week at work or not? Are relatives in town or not? Etc. How much spare time a person has is very much their spouse’s business. If a man is playing video games when he needs to be working, this is certainly a problem. If a man is spending excessively on video games, that is a problem. If a man is neglecting his family to play video games, that is a problem. These are reasonable points that a woman should raise with her husband, especially if he is the HOH. If he is a good HOH, he should honestly consider what she is saying, and if it is at all reasonable, adjust his behavior. As in everything else, if he isn’t sure who is right, he should err on the side of doing what his wife asks, because that is the chivalrous thing to do.

If she is being completely unreasonable, however, that is what the paddle is for. If you just gave the ok for her to spend $100 on shoes, and she then claims you are wasting money when you buy video game for $50, she might well need a paddling. If your wife just spent two hours watching “Project Runway” while you mowed the lawn, and is now griping that you want to play “Halo” for a little while, she probably needs a paddling. Finally, if the last three movies you’ve been to with your wife all had Sandra Bullock in them, and you didn’t complain, but she throws a fit when you want to watch “Predator”, she most definitely needs a paddling.

Casual Chauvinism and the T-Shirt Wars

Korey has been asking me to post, and I’ve been planning to do so, for quite some time. The trouble is that I always have things I want to post, and I think through what I’m going to say… then I think of something to add, then something else, and on and on, until I realize that the post will be so long that I have neither the time nor the energy to write it. So, I promised Korey I would keep my posts at least reasonably short, so that I can actually make myself take the time to write them.

Korey and I were at the outlet mall today, and we walked by a store selling BBQ equipment, including some aprons. In order to make these aprons appropriately manly (it is BBQ, after all, not baking cookies), they all had various manly phrases about meat, or sports, or cars. One of them had this statement, obviously directed at the manly apron wearer’s wife: “In the time it took you to read this, you could already have gone and gotten me a beer.” I admit I laughed out loud at this. However, it also made me think about how accepting our society has become of what I would call casual chauvinism. I’ll give a better definition for this term later.

While thinking about this, I remembered another time a few years back when I was struck by the same concept. My girlfriend and I had just had a relatively petty argument which had turned into a fight, and she was laying in the sun on the beach (we were spending a day at the ocean while visiting her family, who live near the Texas Gulf Coast). I wandered into a large shop dedicated to selling all types of T-shirts. As I wandered, I noticed that one entire section was devoted completely to girls’ T-shirts with various insults toward men printed on them. Many of them were the usual, benign girl-power stuff, like “If it has tires or testicles, its going to give you trouble.” However, I noticed that quite a few others had pretty harsh insults on them, attacking the average man’s intelligence, abilities, looks, etc. I honestly don’t remember what any of them said, but I remember thinking that these were far more insulting than the average T-shirts sold in mall kiosks. 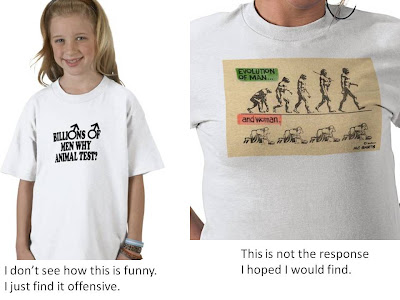 A silly thing to be bothered by, of course, but I was in a bad mood toward women at the time, due to my recent argument, and so I looked around the store for similar T-shirts designed for men. I soon found them, but they just depressed me further. Of course there were the usual “FBI: Female Body Inspector” and similar shirts, which could in a way be considered a response to the insults heaped upon men in the other section, but these didn’t satisfy me. I don’t really know what I was looking for, exactly. I didn’t seriously expect to find a T-shirt with “If you don’t treat me with more respect, young lady, I’ll take you over my knee and spank your bottom bright red!” printed on the front, although that would have been nice. I think I just wanted something at least somewhat mature and intelligent, which again was silly because I was at an oceanside T-shirt shop, but again that was the mood I was in at the time. 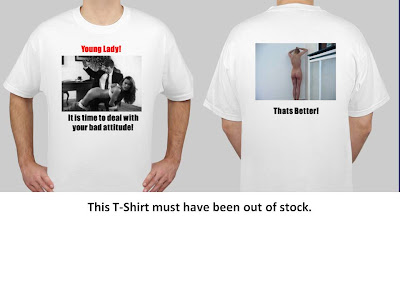 Finally, I saw a T-shirt alone on a display. I couldn’t read it from the angle where I was standing, but I already knew this T-shirt had something to say. It stood out, apart from the others. As I came closer and looked up at it, I got my hopes up. Here, at last, would be the response of the male sex to all the abuse. It was solid black, with large, bold white lettering on the front. The phrase was simple, unequivocal, and profound:

“I will destroy you with my enormous cock.”

This was not the response I had hoped for from my half of the species. However, it did make me think about what society will accept from men, and what it will not. Society will accept chauvinism from men, as long as it is done in a lazy, stupid, boys-will-be-boys type of way. This is what I referred to earlier as casual chauvinism.

Now, I need to end this post in order to keep with my “short-post” promise, but there are two separate issues I would like to address in follow-up posts.

First, why has it become acceptable in society for women to constantly, aggressively, and harshly bash not just individual men, but the entire male sex? I’m not talking about playful poking of fun between the sexes, I’m talking about a sustained attack on everything that could be loosely considered male.

Second, why has it become acceptable for men to descend deep into chauvinism, as long as they do so in a way that is lazy, stupid, and slobbish? Just as an example, why is it that if a man were to walk around in public with a shirt that said “A woman should be naked, in the kitchen, making me a pie” that wouldn’t really make anyone raise an eyebrow, but if a man walked around in public with a shirt saying “In a Christian marriage, the man is the head of the household” he would have feminists parachuting in to confront him in a matter of minutes?