We have a guest! Jinni James

Hey, everybody! A wonderful friend of mine, and she also puts together a small ezine called “Muse Mag“; give it a look as well! As for now, I’ll treat ya’ll with an excerpt and intro to her latest release! Thanks for visiting, Jinny! 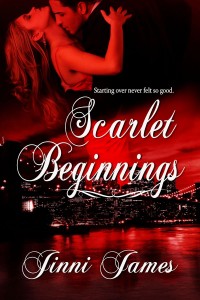 She gathers with her bridesmaids and watches as each one begins to walk down that long white aisle.  Scarlet can barely see him until Evie, the last bridesmaid and her maid of honor, begins walking down the aisle.  He looks so handsome and happy in his white tuxedo.  His blonde hair perfectly in place, his eyes looking on with anticipation and his white pearly teeth show through the biggest smile she has ever seen him wear.

As she steps up to the double doors of the church leading into the main room her heart begins to race.  Her family to the left, Jason’s family to the right, white roses everywhere, white as well as red rose petals line the floor of the aisle leading up to him where he stands under the white altar she is supposed to be walking to.  The longer she stares the louder her beating heart becomes until it’s pounding in her ears.  Her fingers begin to tighten around her bouquet of roses and lilies as sweat soaks her palms.  Suddenly it feels as though someone is sitting on her chest.  It becomes harder and harder for her to breathe.  As Scarlet looks around the room and sees everyone staring right at her, the shaking gets worse.  Her breath comes out as fast pants as she feels her knees beginning to betray her.  She thought she could do this; it turns out that maybe she can’t.  She takes a step backward then listens as a gasp slips from everyone’s lips.  She takes another step back then the sound of her bouquet falling to the floor is her cue to turn and run like hell.

Scarlet runs as fast as her heeled feet will carry her right into the parking lot.  As she begins scanning the parking lot trying to figure out what she’s going to do she hears someone calling from behind.  She turns to see her best friends Evie and Gina running toward her holding their long indigo blue dresses up so they don’t trip over them.  Soon their arms are around Scarlet and leading her toward Evie’s car just as she sees every one come out of the church.  They toss her into the back seat then jump in the front and take off.   She can’t help but notice all the stunned faces of everyone standing outside the church watching, including Jason’s.  While her breathing becomes more normal, her heart sinks into her stomach.  Holy shit, what did she just do?

We must be willing to get rid of the life we’ve planned, so as to have the life that is waiting for us. The old skin has to be shed before the new one can come. – Joseph Campbell

Scarlet Lemay always thought her wedding day would be the happiest day of her life. However, that was before she found herself at the end of the aisle looking toward her future and unable to take that final step forward. Second thoughts cause Scarlet to run, seeking a new beginning. Unfortunately, her ex-fiancé’ may just have other plans.

A chance encounter with a stunning stranger causes Scarlet to question herself. The charming real estate agent, Ethan Williams begins to taunt her thoughts and dreams. Scarlet knows it’s too soon to start dating again but something about this man keeps calling her to him.

With the encouragement of friends, Scarlet begins to build a new life, yet her past keeps coming back. Will she be able to let Ethan in or will her fear cause her to lose out on a chance at finding her true soul mate?