Shared Between Them by Korey Mae Johnson 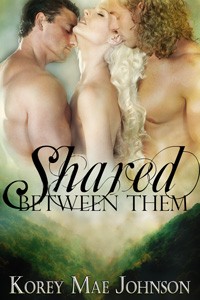 Considered untouchable by her kin, Kyra has been an outcast all her life.  Then two massive, battle-hardened human warriors stride into her woods on a quest to kill a giant and claim a great reward, and after her attempt at petty thievery is foiled, she finds herself stripped naked and soundly spanked.

But that is only the beginning, for the reward for the death of the giant is not only gold and jewels, but the hand of an elf-maiden in marriage, and Kyra is shocked to the core when she learns that the humans have not only completed the quest which cost the life of every previous adventurer, but they have chosen her as their prize.

Taric and Draeven neither understand nor concern themselves with Kyra’s status as an outcast—all they see is the most beautiful of all the elves, a woman who they have both longed to claim as their own and fill with their seed since they first set eyes upon her.  Raised as brothers, they have shared many women before, and now they will share a wife—and take her in any way they please, as often as they please, until she bears a son for them… the half-elven son of giantslayers whose birth has long been foretold.

Kyra, who had never expected to feel the pleasure of a man’s gentle touch, now must submit herself to the fierce, insatiable needs of two hulking barbarians. Yet something stirs within her, and though she blushes with shame at the very thought, she wonders if a day will come soon when she will beg for more.

3 Responses to Shared Between Them by Korey Mae Johnson