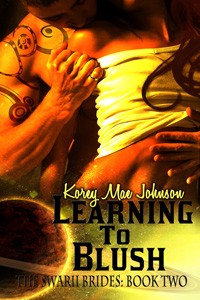 After graduating high school, Penny’s life has fallen into a pretty simple routine: work part time at her cousin’s auto repair shop, build up her self-taught computer hacking skills, and most importantly, sleep with every decent looking man who passes through her small town.

Then Penny’s cousin Ellie suddenly returns after having gone missing for over a year, and Penny’s simple routine is upset. A couple of months later, two very large, very handsome, very strange men show up looking for Ellie, with one of them claiming to be her husband, and Penny’s life changes abruptly. She finds herself irresistibly drawn to the companion of Ellie’s husband, and his obvious distaste at her promiscuous ways only increases her need to have him.

In the midst of her attempts at seducing him, however, rapidly unfolding events demonstrate that Ellie’s new friends are not just strange, they are aliens, and they are being hunted by an old and powerful enemy. Before she fully understands what is happening, Penny finds herself aboard their small spacecraft, fleeing across the galaxy. Somehow, all of this does not dampen her desire for Thorton or his growing need for her. When a poorly-planned escapade on her part forces Thorton’s hand, though, she discovers that Thorton’s earlier warnings were true, and instead of a hot one night stand she now has a mate for life. A completely dominant mate for life who is fully prepared to take her in hand.

Penny soon learns that while Thorton would give his life for her without hesitation, he will not put up for a second with her bratty behavior or her defiant attitude, and that when she misbehaves badly enough, a long, hard, bare-bottom spanking might only be the beginning of her troubles. She also finds that sex with Thorton will not be on her terms, and that nothing she experienced back on earth could prepare her for the heights of pleasure – and the utter red-faced embarrassment – that come with Thorton taking her in ways she could never have imagined.

One Response to Learning to Blush: The Swarii Brides, Book Two by Korey Mae Johnson