Ass kicking? What are you, Korey? Some sort of blood-lusted action-movie, testosterone-ridden she-male?

I don’t think so. Actually, when it comes to movies, I don’t like too much action. I think it detracts from the story there. Why? Because they only have 2 hours to tell a story and something’s gonna get cut. I can’t watch horror movies, either. They give me nightmares.

Teatime is fun, that’s why the Brits have one every day. I don’t like it to take up the whole novel, is all.

With novels, we have as much time to tell a story as we need to take. So, I feel in that case, an action scene, or even violent imagery, can help ground a story. It can help make a character seem darker, more real. It can make the stakes a little higher. Sometimes one action scene can take the place of a MILLION tea-times.

Tea-time is what I call two the hero and the heroine matching a battle of wits… the entire novel. Around the coffee table. Sure, maybe tea’s not being served, but that doesn’t mean it’s not tea-time. When I used to play a lot of Muds, Moos, and Muxs (those are online text-based roleplay games), we used to complain about them a lot. There were those who wanted to stir the pot and get the “plot” moving through action and drama, and then there were the people who just wanted to sit around and chat about the craziness outside their virtual walls.

The same rule applies in novels. Some people want to shake the shit out of a plot and go crazy with it, bringing in action and violence, and making “the stakes” really high. Others… Just aren’t interested. Did you ever read the Twilight Series and decide that out of all four books, Breaking Dawn was your favorite of them? You’re a tea drinker. You’re fine, you have your place–you and I just don’t like the same books, is all. For me, I like to hold my breath while reading a novel.

For example, I just finished reading “Shadow’s Claim” by Kresley Cole. After that, I broke down and read “Poison Princess” as well, even though I knew it was going to be a cliff hanger that was going to put me in that limbo of waiting for the sequel forever and ever.

Shadow’s Claim wasn’t Kresley’s best book, but it was much better than 99.9% of books I’ve read, anyway.  Let’s just say that the main character kills countless people in the course of the novel via beheadings, violent melees, one-via-one combat, and that’s not where the tension ends. The main character is tortured by winged warriors known as Vrekeners in the very first chapter. The book’s violent.

Poison Princess was a young adult novel that… is the most violent and deliciously action-packed young adult novel I’ve ever read. Let’s just say that if they ever do a miniseries, it will have to be on HBO because it’s gonna be rated R even without too many sexual overtones (that miniseries would rock my world, by the way. C’mon, HBO!!). I mean, four chapters are told from the POV of a man who wants to cut up the main character and put her body pieces into jars. There’s battles, and archery, and car crashes, and zombie-killing–one scene after another. The book was slathered with awesome sauce.

Still, these stories more than made up for it. The violence and chaos in the story thrust the characters together to make their bond even stronger, even more believable, and even legendary.

Alright, so you like erotica with that sort of violence?! WTF? You get turned on by that stuff? 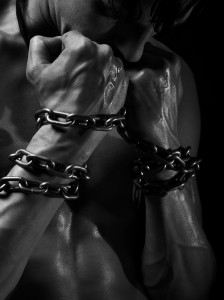 Dangerous situations, scenarios, and histories can sometimes be implemental in making your character fascinating… And super hawt.

No, it doesn’t turn me on. There’s another fallacy:

A ROMANCE DOES NOT HAVE TO BE ROMANTIC THE WHOLE WAY THROUGH.

You know after you’re done camping, you come home, take an INCREDIBLY long shower, and then your food tastes sooo good and you feel soo clean? Well, violence and action is camping–you make your characters rough it, go through dramatic scenes that strengthen their character and then when there is sex or spanking, you are SO hungry for it, and MAN do you appreciate it. You have to let your reader fret and worry about the main characters.

As Marquis deSade said: It is always by way of pain one arrives at pleasure.   Remember to spice it up; make your characters earn each other, earn themselves, and earn the reader! Bring pain to all, so everyone can get more pleasure from it!