Otherworldly Discipline: A Witch’s Lesson is available for purchase! 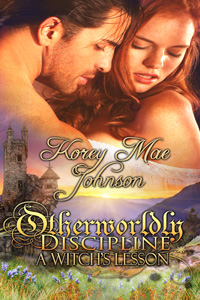 At long last, Otherworldly Discipline is available for more than just to members on Bethany’s Woodshed, where this story was originally published.

But you get more than the members do. For one, this story was heavily edited and clarified. Secondly, it has a bonus chapter included to the next book of the series!

This was actually one of my favorite stories to write. It came out of my brain very quickly, and the characters actually got along like they were supposed to from the get-go, even though I was so indecisive about what plot I wanted to use for it.

Originally, I planned this story to have a very different plot: the main girl was originally living in a wizard-torn human world on the down-low as a well-hunted fugitive, hiding from her own race. Ashcroft was a wizard she was trading with for supplies, who she didn’t trust either, and Ashcroft was stuck in the dangerous Otherworld because the other wizards banished him there. Moriarty was originally a werewolf, not a werefox (Huxian), but that being said, Ashcroft was still a patient yet exasperated teacher, Moriarty was always his rakish, snarky servant, and Charlotte always had the attention span of a knat.

I can’t wait until the plot of this completed version, which is completely different, continues to unfoil in the second of the series. We’re also excited to see how “Fantasy” sells to know if we should publish more of it in the future.

Buy This Story on Amazon

Buy This Story on Blushing Books