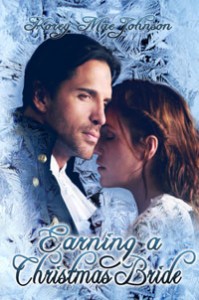 Summary: When Edward Grimm awoke Christmas morning to find a beautiful young girl asleep on his couch, he knew his first ever year off the naughty list hadn’t been in vain. Her presence meant that last Christmas hadn’t been a dream, and that his life hadn’t changed for nothing. It meant he had another chance.

Last year, Faith Claus had done the unthinkable: she had snuck onto her father’s sleigh and visited the human city of London. She hadn’t gotten far that night—she fell right off a rooftop and onto the head of Edward Grimm: London’s most lecherous, womanizing bachelor.

After the most magical night Edward had ever spent with his clothes on, he had awoken to find her gone, and she had been hauled back to the North Pole for a strict chastisement from her loving father, Santa Clause.

A year later, and with a whole lot of help, she found herself back in England, and back with Edward–but the only way Edward can keep her is if he proves himself worthy. But can a rogue like himself ever earn his bride? And if he could, could he tame her?