Published January 14, 2010 | By Korey
I know what you’re thinking—what the hell, right? Well, I’ve been a lot of places in a short period of time, trying to get things done all the while. I went to Oregon, Dallas, Florida—here, there, selling the house, blah, blah, blah. Every second of every day, however, seems to be tied up in finding A) A good ecommerce solution for an eBook store, B) a good programmer or C) Both. 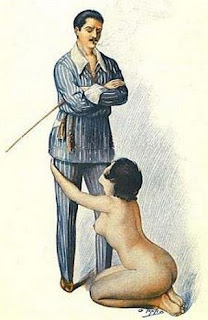 Okay, enough about your dull work life. I don’t even care that you work in the spanking industry. Let’s talk about spankings, already! Sheesh!

I don’t know where to start. I’ve gotten so many spankings since Christmas, I don’t even know where to start! I mean, I get a spanking every single day anymore. It might be short, but it’s still there. Today, I believe, has been my first spanking-free day all week.

Details? Urgh! More like gripe. It’s that damn spanking diet. I gained back some weight when I was on vacation, and James came down upon me with more rules, regulations, and punishments that I can shake a stick at. I’m at 150 now… So, 4 pounds up… Again. And I really don’t think James is going to tolerate it any longer.

I got THE worst spanking EVER just this last Sunday. Mostly because I was eating cookies instead of lunch, eating “lunch” at 4 instead of before 1:30, and I barely ate breakfast. Oh—and I hadn’t written a thing down in my food journal all day.

Anyway, he asked me if I had eaten lunch. I looked sheepishly down at my cookie. There was about to be a reckoning, I knew it, because my eyes lit up with all the crap I didn’t do.

I think I go through periods of being absolutely the stupidest person on earth, is what the problem is. But he wasn’t listening to the fact that I was stupid. I don’t think things could have gone any worse than if I threw my cookie into his eye.

I was incredulous. He told me to go into the bedroom and take off all my clothes and put the paddle on the bed.

So, that’s a bad start. I was nearly hyperventilating—the paddle?! I had done something so wrong as to require the paddle?! Without driving home drunk or taking hard drugs? Because I think that’s the only time when I could understand the paddle. The paddle is a force which I still don’t know how to accept. 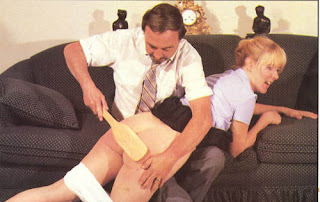 But, I have to admit, when he was lecturing me and listing the charges against me, I was nearly laughing. I was pretty ridiculous—and he was right—I wasn’t taking my diet seriously enough. Which is probably why, after 10 years now of trying, I have not been able to obtain my goal weight.

So, he pulled me over his lap… (We have a new position, by the way! He takes the pillows away from the headboard, sits with his back up against the headboard of the bed, and pulls me across his knees. His leg is actually easier to position across my legs and he’s better able to hold my arm in a way that it won’t fly back though he doesn’t have to twist my arm and risk hurting it. So, the pin-down works on all fronts.)

I was naked already so, needless to say, he didn’t warm me up by spanking over my panties like he occasionally does. He was spanking SO hard I was actually thinking that he was thinking about not using the paddle, after all. If he was going to use the paddle, I thought, why would he be spanking so hard? Okay—I wasn’t actually thinking—I was in crazed animal mode. But if I had been thinking, it would have been that. He was being dramatically thorough. He was getting my inner thighs, my upper thighs, in and out and all around—he was everywhere! My sitting area was just getting ruined.

And did I tell you about my beginning? Because I begged my ASS OFF. I was panicked before the spanking even began. I tried to think my way out of this situation. I understood I needed to be punished… But spanking? Why must it ALWAYS come to spanking? Aren’t there other punishments? I was a fountain of ideas—I’d heard of people getting grounded, or stripped away of privileges. Butt plugs? I’d have even taken an enema at that moment. I didn’t care. Anything but a paddling. Anyway—it was like negotiating with a wall. James had already made up his mind.

After the spanking ended, I had even considered escaping. Running to the car naked. Because, as soon as he finished and told me I could get up and stand in the corner, he told me, “This is just a small break before the paddling.”

It wasn’t over?! It… Wasn’t… Urgh! I was wishing I could faint on call. Maybe THAT would get him to loosen up. I wasn’t crying yet, but I was surprised that I wasn’t. Is it possible to be so mind-boggled by your punishment that you can’t really cry?

As I was thinking this, I was called out for “Round 2”. Oh! Why did I eat that cookie? I knew it wouldn’t quench my hunger! I had planned to eat a sandwich afterwards—why didn’t I switch the eating order? Why am I so brain-dead when remembering to update my food journal?! Why?

Personal pity-parties don’t make you feel any better about a paddling at-hand. They just make the whole thing even worse, somehow, like focusing on the “what I could have done” magnifies the whole situation. But I couldn’t help it. I just kept on thinking, “Why, why, why?!”

Because the paddle was every bit as terrifying as I remembered it. There’s nothing good about the sharp cracking feeling across my flesh. It’s like a lightning bolt against the ass. And he only gave me SIX—six horrible, ugly, gut-wrenching smacks. I don’t know what the neighbors were thinking about all this, but I KNEW they could hear me. Who couldn’t? YOU ALL probably heard me and only thought it was the wind. Because I was truly that loud.

When he sent me back into the corner, I practically ran there, trying to catch my breath. Again—no tears. Maybe I’m dysfunctional? Because it was the worst spanking I had in memory. I stood in my corner with my ass throbbing, thanking God that it was over. I was almost elated—no. I WAS DEFINITELY elated. I could sing songs. I was so scared, and now I was so warm, so wonderfully punished. It was behind me.

James cuddled me while I was in the corner, and then took a picture of my bottom (he’s been doing that all week—he wants to make a photo collection). I would post it, because I’m nearly proud of how red my ass was, but I still don’t like the look of my love-handles from behind so I’ll hold out.

Anyway, lots of spanking-blog to come, guys! Thanks for hanging with me!