Alright—well, most of you probably know by now—James and I are under a TON of stress. We’re moving out of our house, doing construction on a condo, keeping the house clean for showing, we have pets, jobs, appointments and he had to go all week to a conference. And we’re moving to Albuquerque for the rest of the summer on Friday.

Needless to say, if we lost our minds, I think everyone would sympathize with the situation.

But isn’t it funnier that with everything we’re up to, none of that stuff made me go so crazy I earned myself a spanking this last Sunday after church? It was a craving. And no—I’m not pregnant. I don’t have as good of an excuse. I wasn’t even famished—I wanted French toast. I don’t know why, but I did. I wanted something bready and eggy, and God help the man who got in my way. 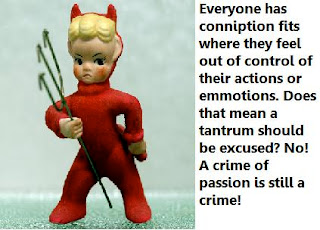 James normally doesn’t care—he hasn’t regulated my diet since I had foot problems 3 months ago. The night before, in fact, we had a sugar binge while we went to the movie theatre to watch “Year One”—which was horrible, but we had SO many goodies that I slept horribly and I had a headache the next day. Something happens to me the following day after a diet mistake—I deform. My face, for one, deforms into this strange ugliness reminiscent of the woman-villain in the Goonies. I look like half my face caves in.

Luckily, I was able to get a hold of myself for church, and I had pulled back the headache. But, unfortunately, I had already made 3 complaints—one that morning and 2 the night before, that I had WAY too much sugar, and what was I thinking.

So, when I mentioned that I was going to make “French Toast” when I got home, James felt he had to say something. “Remember—you had a LOT of sugar last night, so maybe you shouldn’t have anything sugary this morning.”

Something dark suddenly swept over me, and my mood did a 180. I was now on the verge, after we were holding hands and kissing each other’s cheeks and being nauseating after church, to someone who was contemplating manslaughter. “French Toast doesn’t have sugar on it,” I reminded scathingly.

“Yeah, but the syrup you’ll put on it does.”

We’re lucky we didn’t get in a crash. I almost unleashed my furry by beating him to death. Instead, I screamed,

” BUT I’M HUNGRY, JAMES! I NEED FOOD! I NEED FRENCH TOAST! GET OFF MY CASE! I’M HUNGRY!” In a voice that Satan would have if he got kicked in the nuts; high and ringy with a blanket of evil over it. It scared ME. But I had no control over how it came out.

He only took my hand and held it. It’s hard to describe exactly HOW he held it. Firm, I suppose. He held it firmly—almost as if he was firmly saying, “I love you. But get a hold of yourself, woman!” but he didn’t. Didn’t say anything. Neither did I.

So; it’s fair to say that I totally knew I was getting a spanking. I mean, I hoped I wasn’t going to get one, but I knew it was coming. When we finally pulled into the driveway, I finally said, “I’m sorry I snapped. I don’t know what happened, there.”

But as soon as I walked into the front door and put down my purse, he looked like he was going to go for coffee, but then turned around quickly and took my hand and led me to the bedroom, saying, “Let’s just discuss something very quickly.”

Yeah, we don’t have quick discussions. So, it must be a spanking. I sighed. I was resolved to it. I had suddenly lost my mind. I didn’t think a spanking would help my future behavior, however, because I didn’t know quite what spurred on the crazy to begin with.

But I had a history. A history of food-crazy. Let me tell you the tale (though quite perverse, I warn you) about how I almost killed my ex fiancé over the left-over brownie batter. This story will make you think less of me, I know, but it’s a true story. I like to think I’m a normal person, too—until I think back to this dark, dark time.

I had walked in from class, and my ex boyfriend, all 340 pounds of him, was cooking—which was what the man did best. He was excellent at cooking, and I’m still trying to shed off the forty-five pounds I had gained during the course of our relationship. That day, he was making brownies.

Now, I don’t even care for brownies. Not as much as the uncooked batter. JP, by ex, didn’t believe in eating batter since he had gotten salmonella poisoning when he was a kid from eating batter with a raw egg in it. Such a thing had never, and has never, happened to me, and I hated that he would try to clean the bowl before I had a chance to lick it.

Today, I was PMSing, and as most of you women know, we need chocolate during this time. We will climb a mountain for chocolate. We will fight for it. And so, I begged as hard as I could for the batter, and finally JP made a deal with me.

If I performed oral on him, I could have the bowl.

Oh my God! Are you a chocolate whore?

Yes, I am. I’m not proud of it, but I took his deal, and afterwards, let him have sex with me, even though I made it clear that I was not in the mood. After it was done, needless to say, I felt deserving of the chocolate. However, by the time I was finished getting dressed after the ordeal, I came out into the kitchen and saw the bowl in the sink, with water in it, soaking.

JP smirked at me and shrugged. “I told you that raw egg’s not good for you.”

I looked at the knives next to me. JP didn’t know how close he was to death. Every inch of my being yearned to take one of those knives and stick it into him with all my strength. I was not myself. I was shaking.

As I was trying to fight this powerful will that was trying to put me in prison for the rest of my life, JP suddenly produced a chocolate batter-covered spoon. It saved his life. I calmed down instantly, but I found I was sick. My adrenaline was surging. I was still seeing white. I had very nearly killed him.

So, I wasn’t that crazy this last Sunday, obviously—but I do have that sort of potential. My friends used to laugh, “You have such a sweet tooth! I don’t know how you’re not the size of a hippopotamus.” Sweet tooth. Bah. They don’t know the half of it. Sweetness is like heroine to me.

Anyway, so I was subjected to this spanking because I was hoping it would harness this crazy food-demon I knew was still living in me, somewhere.

James sat down on the bed and wheeled me in front of him and took my hands in his. “I’ve been very good about not snapping at you, sweetie, but you need to be more careful about how you say things to me. I know you’re craving something, but I only care about your health. I wasn’t lecturing you. I just care about you, and I didn’t deserve that.”

“I know you are, honey,” he said sincerely. “This is just going to be a quick reminder to control yourself.” 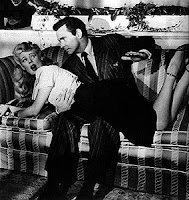 He pulled me across his lap. For some reason, I had an image of those women in vintage-spanking pictures because I had high-heels and a cute skirt on and I looked so house-wife-being-punished-by-her-well-dressed-husband. Until, of course, the spanks started, and then, of course, all I was thinking about was how I could get out of this horrible situation.

I didn’t have much will to complain during this spanking. I was thinking of the story I just told you, and I still felt bad over it. Especially the “whoring myself out for chocolate” part that seemed so unlike the strongly Christian woman who I am now, who could be described even has ‘prudish’.

Not that the spanking made up for it. Actually, for the grief I was feeling, I felt it was over rather quickly. It was only about twenty spanks long, and James counted them out for me. His hand was firm, but he spanked quickly, not torturing me by dragging it out too long.

I realize how lucky I am. I have a man who understands me now, who doesn’t torture me with emotions or compromise my worth, or who I am, even though he knows what my weaknesses are. James is such a strong, nice, very attractive, very successful man that I don’t deserve. Especially because, since he still didn’t want me to have any sugar, he took me out to buy an egg sandwich that would appease my egg craving while not adding too much sugar to my already bad sugar-hangover headache. That man gets me.

3 Responses to When Korey Goes Krazy…